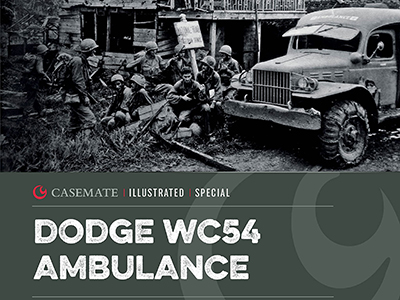 In 1940, the U.S. Army began to standardize the production of vehicles it required to fight a modern war—including support and medical vehicles. The first deliveries of the ¾-ton Dodge WC-54 ambulance arrived in 1942. Built by Chrysler, and utilizing the same chassis and engine as the entire Dodge WC series, the WC-54 ambulance has specific features to use for the rescue and transport of injured soldiers. In all, more than 26,000 Dodge WC-54 vehicles were built during WWII.

Another offering in Casemate’s series of books on iconic WWII vehicles, Dodge WC54 Ambulance combines historic documentation and photos with images from the author’s own WC-54 restoration. The result is a very detailed study of various aspects of the vehicle including chassis, cab, electrical circuitry, accessories, and even the paint and markings. He explains the variations and adaptation made to the series during WWII and points out the differences between the Dodge WC-54s used by the U.S. military and those of the French army.

While not a “restoration guide,” Dodge WC54 Ambulance will be an especially useful resource as you restore or model a WC-54. Interestingly, the author includes part numbers as he explains different pieces of the vehicle.

Chapters on markings cover both U.S.- and French-used ambulances. Step-by-step photos even show how to apply stencils.

The historic photos and details dispersed through the book set this volume apart from a shop manual. Whether for your library or workbench, you will find this book packed with photos and details presented in a fresh perspective. The text is so good, you will find yourself putting down your tools to turn to the next page to see what secrets of the WC-54 author Fabien Raud has revealed. — JAG