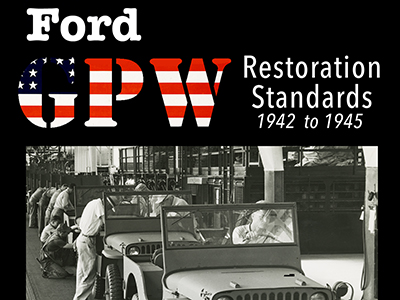 Review by B. Mitchell Carlson

One of the most anticipated books in the historic military vehicles (HMV) restoration world became available just in time for this year’s MVPA-HA convention — Ford GPW Restoration Standards 1942 to 1945 by Michael Wright. This was at least nine years in the making from Ford GPW enthusiast and current MVPA Board Director, Michael Wright, who said writing this book was “his way to give back to the hobby.”  He is quick to point out, though, writing it was, by no means, a solo effort. In the introduction, Wright thanks a full page-and-a-half of people who contributed in putting it together — especially mentioned as being essential are former History In Motion editor, David Doyle, Ian Fawbert, Paul Fitzgerald, Bill Kish, Chuck Lutz, Michael (Junior) O’Connell, and Tom Wolboldt.

While inspired by the MPVA Judging Guide booklet and dependent upon it, this book is far more in-depth. Its intent is to be a standard for what is historically accurate on a particular Ford GPW based on what is currently known about original production details. Primarily, this book will be useful to those restoring a GPW, but for those with an older restoration or tired, original example, this can be a guide for correcting things that were modified over the years, should you wish to bring your GPW to that level — be it for MPVA-HA judging, informal showing, or making it available in the collector vehicle marketplace.

The author also states, on a regular basis throughout the book, that this is based on the “current pooled knowledge of the GPW” and is not a “know-all final” bible of GPW knowledge. While a lot of facets of production are based on rock-solid, known information, there are other details that have faded into the mist of time.

This reviewer has been involved in judging for several different national vehicle clubs, and also helped write an authenticity manual for one of the clubs, so I can fully appreciate the work Michael and the others put into making the information as accurate as possible. In addition, to be fully transparent, this reviewer is also in the process of restoring an early GPW.

While the subject of reproduction parts is regularly mentioned, they are neither given blanket praise or scorned. More often than not, this subject is handled along the lines of mentioning some known reproduction parts that may seem to be authentic, yet are not when compared to known original components.

Before delving into the sections of the book (broken down in similar format to the Army Technical Manuals), the author discusses fasteners and component finishes. This reminds the reader that, over the last eight decades, manufacturing technology has both obviously and subtly changed fasteners and their finishes. Also bear in mind that the commonly know SAE hardness ratings (grade 1 through 8) did not exist at the time GPWs were manufactured.

Each section is lavishly illustrated with original images from when GPWs were in production and, to a lesser degree, with some in use during WWII, confirming build processes, components in use at a given time, and finishes. The production images underscore what was pointed out to this reviewer while attending a basic course on Bloomington Gold Corvette judging – you can’t really accurately restore any vehicle unless you know how it was built in the first place. Those original assembly line images are worth more than a thousand words to those restoring a GPW on such things as why a component is situated where it is and why it’s painted or not painted (even in black and white). Yet the majority of images are modern color photos — primarily of NOS components, but some authentically restored components and the occasional reproduction part that is “close but no cigar” (and more importantly, why it isn’t).

As previously mentioned, because the book is styled on the general scheme of Army Tech Manuals (TMs), searching for a specific component is not overly difficult for those familiar with TMs. However, it would’ve been handy to have an index for those not as well-versed (and those of us who think we’re that well-versed and still have difficulty finding a certain component). We can make due, however, by relying on the table of contents for basic navigation.

As this book describes original production methods and configurations, post-factory motor-pool level equipment (such as the pioneer tools, field modifications, and markings) are admitted as being beyond the scope of the book. However, if something was on a GPW when it was built (be it driven on a common carrier or crated for overseas shipping — there were some differences), it is mentioned in the book.

In addition to component specifics, the introduction also contains all the known listings of contracts, hood number ranges in each contract, plus production by plant per contract and overall by month for all plants, among the other general data. Because there is little in the way of historical text, it may come off as a dry read for the casual HMV enthusiast.

But, even if you are a die-hard Willys fan and wouldn’t touch a GPW on a bet, there is enough pertinent data that crosses over to MBs. If you are a hard-core GPW person, you may already have a copy; reading it over and over again, hanging on every word. If you have a GPW and are looking to restore it — even if you don’t plan on having it judged in MPVA-HA competition, this should be your first “day-two” purchase.

Michael Wright has certainly set the standard for a HMV restoration book. Hopefully, others within the hobby will be inspired by it and come out with volumes with similar levels of detail about other of the more popular vehicles – be it a companion volume addressing the Willys MB, any other popular World War II truck such as the WC-series Dodge, or any popular post-WWII vehicle.

The initial 300 copies of the softbound edition sold out in less than a month, the hardbound edition will be available by the time you read this review.

GPW Restorations Standards is available exclusively from the MVPA Historical Archives at https://www.mvpahistoricalarchives.org/ under the “Books Other Than Manuals” tab. While the price is higher for this hardbound edition, good information is worth the cost.