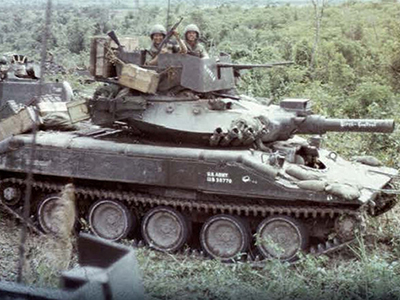 Long overdue, this book is an authoritative survey of US vehicles and heavy weapon systems used during the Vietnam War. Broken into three sections, it provides comprehensive overviews of wheeled tactical vehicles; track-laying combat vehicles; and artillery and heavy weapons, whether tracked or wheeled.

Doyle has made it easy to use this book. Within the three categories, he has organized the subjects according to size. Vehicles are identified by the Standard Nomenclature List (SNL) that begin with the letter “G” (“G-number”) rather than the more popular — but slightly more confusing —“M” number (For example, an “M1” might refer to a tank, helmet, rifle, carbine, or even a piece of web gear. The SNL designation of G-758 pertains only to M38A1 family of vehicles. While Doyle has opted to rely on the SNL designations, he does quickly identify the vehicles by the M-numbers in the text, making the book both instructive and easy for all to use.

Each vehicle or weapons system is introduced with a short text that generally provides a history of development, production, and deployment. This is a prelude to charts of general data and, where appropriate, engine data. Finally, this book is really about the photos — and they are a stellar mix of factory and government period images, many of which have not been seen in civilian literature until now.

From Mules to Goers, Otters to Dusters, and M51 Quad Mounts to M109 SPGs, Doyle covers 36 of the Army and Marines’ most essential vehicles and heavy weapon systems of the entire Vietnam conflict. The photos, descriptions, and specification charts will make U.S. Vehicles & Heavy Weapons of the Vietnam War a standard reference for military historians, Vietnam land warfare scholars, vehicle enthusiasts, modelers, and wargamers. — John Adams-Graf